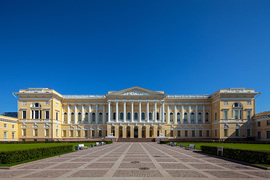 Welcome to Russia! Have you noticed you were in Russia so far? We have offered you numerous Cathedrals and palaces constructed by French and Italian architects. We have recommended visiting the Hermitage, which is full of masterpieces of West-European art. You have hardly heard of anything really Russian till now. It is not our fault. St. Petersburg was a very European city from the beginning - international and open to foreign culture. Nevertheless we would like to give you an opportunity to see some Russian culture if you are willing to find out more about the country you are going to visit. And in this case a tour of the Russian Museum will be a fine choice. 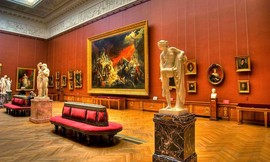 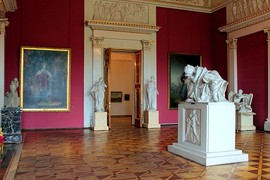 The Russian Museum is an Art Gallery displaying entirely a collection of Russian art - paintings, sculpture, applied art and folk arts and crafts. To open it was the idea of the Tsar Alexander III, whose private collection became the core of the collection of the museum. And though the museum was opened only after the death of Alexander III, in 1895, it was called after him - "The Russian Museum of Emperor Alexander III". Today it owns more than 400 000 items covering the period from the 10th to 20th century.

You will see a perfect collection of icons coming from ancient Russian cities, 18th and 19th century paintings belonging to the brush of the most talented Russian artists such as Brullov, Aivasovsky, Repin, you will be able to compare the official trend of art to the art of some groups of artists which created an alternative style of painting (such as the Peredvizhniki and The World of art), you will see a very interesting collection of the Russian Impressionists and Avangardists. You can find some works by Kandinsky, Malevich and their contemporaries. And as the collection is displayed in a chronological order, you will also be able to see how the Russian art changed under different historical circumstances.

The Museum is situated in the centre of the City, in the Square of Arts. The tour will take about 3 hours.

The Cathedral of Our Savior of the Spilt Blood