The Great October Socialist Revolution and 70 years of Soviet Power. What was it – a great event, a unique experiment or a tragic mistake which took away lives of more than 20 million people? How did it happen that those who struggled for the victory of the Revolution were named enemies of people, arrested and shot or sent to Siberia a few years later? What was the truth about World War II and what was the cost our country paid for the victory? How did people live during "the Soviet Era": were they happy or did they suffer severely? How did "perestroika" start and why is Gorbachov popular abroad and not so popular in Russia? 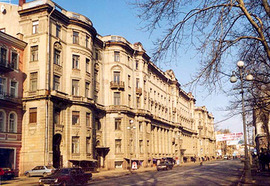 There are so many questions... Sorry, we won’t give you the exact answers to these questions and we are afraid there are no exact answers at all. We do what we can do: we give you some facts, we show you documents, photos and documental movies, so we’ll just help you to find your own answers. Is it interesting? Then, welcome!

We are pleased to offer you tours of the following museums/exhibitions:

You can choose one or several of these museums. Tours will be conducted by a local guide from the museums. The prolongation of each tour will vary from 45 min to 1, 5 hour and will depend on the museum as well as on your interest in our history. In some of these museums tours can be conducted only in Russian, so our guides will interpret. On the way to these museums we will be pleased to show you some other places connected with our revolution or the Soviet period of History, such as the memorial on the Field Of Mars, the Aurora Cruise, a monument to Lenin on Lenin Square, the locomotive that brought Lenin to Petrograd in April 1917 and others.